A downloadable game for Windows, macOS, and Linux

Your job is to sell 1 trillion toasters.

Your customers are finicky traditionalist aliens spread across the universe.

1 Teratoaster was initially made in 48 hours as part of Global Game Jam 2016, later expanded and wrapped up with a few more days of work.

Oh my goodness I loved this! Took a while but I finally hit my numbers!!!

I didn't know what to expect coming into this! I mean, space...toasters? I'm so glad I checked it out cause it led to so much hilarity.

The humor in this game is delightful, and the mechanic isn't too difficult, as long as you aren't doing something crazy like playing this while also studying for classes, making you feel like memorizing an arrow sequence + specific jazz hands for only a minute will make your brain explode....

Anyhoot, I ended up playing the game as a live stream, took around 40ish minutes to hit my sales numbers, and I got a 94% on my chapter test, so everything turned out pretty good in the end!

My only complaint, in the longer stream that I did I seemed to potentially get soft-locked and nearly wasn't able to beat the game, but figured out that the dangerous spaces could sometimes be an abandoned shop with a free item, and if you trade a shop you can make them restock something that you might need. A few times I got to tough spots where it seemed like hope was lost, the only thing was, I only messed up once. Like, I was expecting that if I danced wrong at a few planets, but for just one the game became nearly unbeatable because I couldn't purchase anything I actually needed, partially because the stores didn't stock them and by the time they did, I would be out of things to trade to get them. Curious if there's any protections against stuff like that from happening?

Other than that, this was such a fun game and I'm so glad I tried it. Thank you for such a wonderful time!!

Pog i sell a lot of toasters

Lovely little game with a hilarious premise. The randomness can treat you really well or really poorly, but it's not necessarily a problem in such a short title. Thumbs up, had some fun dancing my way through the galaxy at the end of an exhausting day!

Very fun game, although i had to restart a few times because i couldnt get the items i needed. Also black holes made me piss myself every time i encountered one, the graphics on them are very well done

Why would you make a 32-bit Linux build? There are more people running pure64 than 32-bit these days.

Or just make both.

I didn't get anywhere near beating it but its pretty fun! Graphics are great, the props and costumes are fun, but found them difficult to obtain exactly what I needed. Took a bit to understand how to dance properly, but after a few tries I understood what I was doing wrong, but think my understanding came a bit too late as I found there were no planets I had the required items for and had to abandon into a black hole. Made a video, I hope you enjoy!

Very cool aesthetic.  I'm always sad that games like these never get expanded into their full potential.

Your preview gif is awesome!

Doesn't run on Mac Catalina "The developer of this app needs to update it to work with this version of macOS. Contact the developer for more information."

WELL my luck is bad

randomly found this, looks like im about to have a good time

Would love to try this, but it doesn't run neither on a recent Ubuntu LTS nor MacOSX (as 32bit support was dropped).

I made it, I sold these guys a teratoaster! :)
Btw important question: if no one in that universe has a toaster, is there toast invented?

this game is hilarious

Hey! I made a video about your game! I cannot wait to see what you do next!

Doesn't run on Ubuntu 16.04 as it has a newer libXcursor, any chance of an update to work with newer versions too? 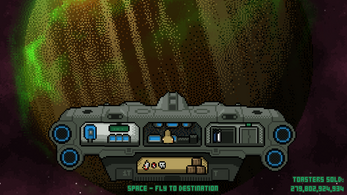 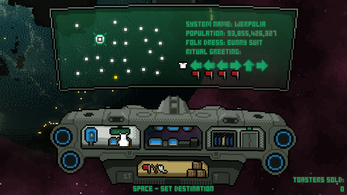 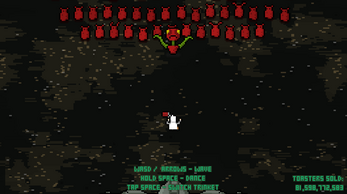 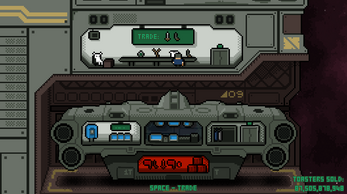